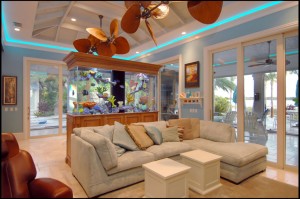 The centerpiece of the Conroys’ living area is a 500-gallon aquarium, which is populated by fish who are, their owners claim, as happy as they are beautiful.

Dive into the saltwater world of pampered puffers, clownfish, triggerfish, eels and tangs.

Showtime at the Conroy family’s Orlando home arrives every evening around 7. That’s when Lips, Frenchy, Hollywood, Dory and a dozen or so other salt- water fish are fed.

“It’s a blast to watch,” says Claudia Conroy, who has made the 500-gallon custom aquarium the focal point of her family’s lakeside home. Her 25-year-old son, Bobby, often does the honors at mealtime, pouring a bit less than a cup of thawed shrimp and crayfish into a small holding tank hidden in cabinetry below the 3-by-8-foot aquarium. As soon as the food reaches the fish, says his mom, “you can understand where the expression ‘feeding frenzy’ comes from.”

While plenty of hobbyists still sprinkle fish food into 30-gallon tanks purchased at pet stores, the world of large custom aquariums takes the experience to a luxurious level. With light- weight acrylics that can be molded into any shape an enthusiast can imagine and afford, tanks can be built into walls, made into room dividers, fashioned into headboards and even hung from ceilings. Pumps, filters and other essential equipment can be hid- den away in cabinets, utility rooms or outside. No noise, no mess – just beautiful saltwater fish on a synthetic coral reef that’s as colorful as the real thing.

Custom aquariums are almost always saltwater. Saltwater fish are more difficult to maintain than freshwater varieties, but they’re far more colorful. And with an appropriately liberal bud- get, maintenance can be a breeze.

For Conroy, a petite, self-described “high-strung” woman with a gift for interior design, a saltwater aquarium was part of her second home even before it was built in 2009. She wanted the family’s home-away-from-home to be all about water and tranquility.

The primary residence for Claudia and her husband, Bob, is in Long Grove, Il., where they run a successful recycling business. They have three adult children – Chrissy, Brittney and Bobby – and a granddaughter, 13-month-old Ella, who already has the word “fish” in her vocabulary. Their second home, from which they can watch Disney fireworks nightly, includes a boat dock; an infinity-edge custom pool in the backyard; a wall-of- water fountain in the foyer; and colorful glass bubbles dangling playfully in the great room. At the center of it all is the aquarium, framed by maple cabinetry with crown molding.

Conroy is the first to admit that keeping her finned family healthy takes out- side help. She gets it from Bottled Ocean Inc., a 15-year-old Orlando company specializing in the design, construction and maintenance of residential and commercial aquariums. The company visits the Conroy home weekly for routine maintenance and cleaning, and once a month pumps out part of the tank and refills it with freshly treated water.

“We supply the tank, the fish, the food and [the maintenance] service,” says Greg Lund, Bottled Ocean’s president. Despite the economic downturn, Lund says the rarified world of high-end, custom aquariums – costing $25,000 and (way) up to design, build and install, plus $300 to $700 a month or more for service – is going strong. Lund names Windermere, Isleworth and Gotha as communities where “we’ve seen a lot of growth.”

Orlando and its environs are a relative bargain when it comes to maintenance costs, Lund says. Aquarium owners here pay on average about $1 monthly for each gallon of water their tank holds: A 300- gallon tank costs roughly $300 monthly for regular service. In South Florida the typical charge is closer to $2 per gallon,

Lund says, while in Chicago and New York City it’s as high as $4 per gallon.

Lund says the best custom aquariums are built into the home’s design. Jim Robinson’s Windermere home is another case in point. An empty 700-gallon aquarium sat in Bottled Ocean’s warehouse for two years while his house was being construct- ed. It required a crane to install, along with careful planning by Winter Park architect Mark Nasrallah, to make sure the home and foundation would support the filled tank’s 41/2 tons.

Robinson, owner of Electro-Magic Productions at Universal Studios, has no regrets. “It took me four years to design the house, four years to build the house, and I’ve lived in the house for four years. The aquarium has been the centerpiece the whole time.” His aquatic menagerie includes several varieties of tangs and a rare Brazilian dragon eel that set him back $200. “It’s not aggressive; it gets along with the other fish. It just looks real mean,” he says, noting that many of his other fish cost under $20. The trick is buying them young and small.

Robinson has learned some painful lessons. He lost a 20-pound grouper, which had grown from 2 inches to 2 feet in his tank, in a daylong power failure. He lost a few other fish when he left town and forgot to turn on his central air conditioning. His system now includes an aquarium chiller and a battery-operated air pump that kicks on when the electricity kicks off.

He also now knows to seek advice when- ever adding fish to his tank. “I made the mistake one time of buying a fish myself,” he says. The small queen triggerfish was fine for a while, “but when it grew in size and aggressiveness, it killed any new fish in the tank. The guys at Bottled Ocean know which fish play well with others.”

Barring calamities, Bottled Ocean’s Lund says the typical lifespan for a cap- tive saltwater fish is roughly 8 to 12 years, about the same as in the wild. Aquarium maintenance services not only make week-

If you’re looking for an eye-opening custom aquarium, give Waterlife Design Group® a call. Our team’s experience in the public zoo and aquarium industries ensures a high-quality system in your home. And you’ll get your design, supplies and installation from one company, so all your questions can be answered with a single call.

ly visits, for an extra charge most will come daily when owners leave town, and make emergency visits whenever necessary. “We answer the phone 24/7,” Lund says.

But even with such personal service, would-be custom aquarium owners need to understand the commitment involved be- fore taking the plunge, warns Nasrallah. He estimates that of the roughly two-dozen custom homes he builds each year, fewer than a half-dozen include custom aquariums. “The payoff is great,” Nasrallah says, “but it’s definitely a high-maintenance item.”

Maintenance goes beyond keeping fish healthy, says Claudia Conroy. She wants them happy, too. Yes, she can tell when her fish are happy and they really do have distinct personalities, insists Conroy. Her current BFF, a puffer fish dubbed Puff Daddy, is at times aloof, at other times eager to annoy the resident hermit crab – and always hungry. Conroy still pines for her former favorite, a blue-and-gold majestic angelfish that took sick and died last year. “When it was sick, all the other fish seemed to know; they’d come and stay by it. Maybe I’m projecting, but even though they’re fish, they become part of the family.”

That’s why – like her pet Labrador, Duke – her fish have names: There’s Hollywood, a Blue-faced angelfish that “looks like he’s wearing sunglasses”; Dory, a blue hippo tang recognizable to anyone who’s seen Finding Nemo; and Frenchy, a French angelfish that last year was one of the tank’s smaller creatures but is now easily its largest. Lips, a naso tang with a come-hither smile, even has a nickname: Betty Boop.

For granddaughter Ella’s enjoyment, Conroy would like to add a clownfish – to be named Nemo, of course – to the mix. And she thinks a lobster would be really cool. She won’t rush anything, though. She doesn’t want any new additions up- setting her happy tank. After all, it’s her lifeline to a favorite pastime.

“I have extreme claustrophobia, so I’ll never scuba dive,” she explains. “This is the closestIcangettothesebeautifulfish.”